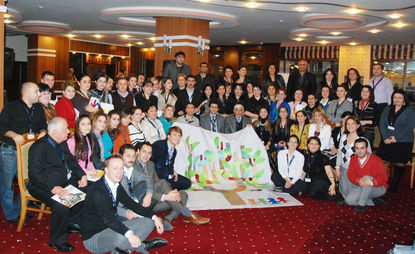 The Shift From Command To Ownership With Teachers In Azerbaijan

How do you prepare Azeri teachers to provide lessons on Democracy for their pupils? Because we believe you can only learn about democracy - how it works, what it asks of you as a citizen - by experiencing it, we made a Game for Caucasus youth. We blogged about this experiences before. Now, the next step is to support teachers in working with that Game. We chose a similar approach: instead of 'lecturing' and 'explaining' we engaged the teachers in an experience, through which they could learn about how to facilitate learning about democracy. An exciting visit!

There is a busy bustle in the Happy Inn Hotel in Baku, Azerbaijan. It is Wednesday 15th of December 2010 and sixty Azeri teachers from diverse ethnic and minority communities are having discussions and feeling a little confused. We have just given the assignment to design their own simulation game on democracy using a framework and building blocks we provided the day before.

At that moment, when we introduced the program and gave a rough overview of the framework for the simulation game, we felt a bit of confusion ourselves too. During lunch earlier we had discovered that this way of working was totally new for Azeri teachers. Because this event was not about 'telling them what to do' or 'commanding', instead we were creating space for the teachers to choose what they wanted to do. This of course raised big questions at different levels: ‘How do I deal with that?’, ‘How do I know what to choose?’ Perhaps even ‘Do these foreigners know what they are doing?!’

We facilitated a process of finding answers to these questions through a carrousel of workshops that afternoon. In these workshops we explained the four day simulation game in more detail: how it flowed like a story full of action and reflection. In fact, we did not only explain, but also created moments of experience for the teachers in which they experienced several important parts of the simulation game: an election procedure, a debate, a survey, seeing the world from a different person’s perspectives and so on. And it was fun!

Example of an experience

One example of such an experience was the workshop about the election procedure. To start the workshop, Pieterjan (who was facilitating this workshop) simply left the room - asking each group to create an election procedure and elect a facilitator for the workshop without his help. After ten minutes, of course they succeeded! Following on that exercise, we reflected: ‘What did you do?’, ‘What can we learn about transparent and fair election procedures?’ From here it was possible to formulate seven steps for a transparent and fair election procedure. Who came up with these steps? The teachers themselves – all the time developing the notion that the teachers don’t need Dutch experts to explain democracy to reflect on their own experience and rich history, they can learn about democracy from within themselves.

'One person can make a difference!'

The excitement around the program started much earlier. We in fact started at a press conference with headmasters of the schools, teachers and representatives from the European Union and the Azeri Department of Education. Here Katja Plate, director of KAS South Caucasus, gave an introduction on the whole project and the central message was clear: One person can make a difference! The Azeri project leader followed with a nice overview on the schedule and the different stages of the project. Headmasters and teachers were starting to smile!

The final part of the press conference was presented by Pieterjan. Here we followed by emphasizing that Baku used to be a central point of the Silk Road and still is a major connection between Eastern and Western cultures. When we walk through this city, we see a great mixture of Eastern and Western influences in nature, architecture and ethnicity. This region used to be very important in the development of cultures and civilization of East and West. Through this route people globally shared stories, ideas, and concepts about living together. From China to Europe and everything in between. This became a powerful metaphor for the training event: we didn't want to lecture about democracy -  that wouldn’t work. But the Silk Route showed us that we learn ‘living together’ by ‘living together’ and co-operating together. Inspired by those roots, Azeri can create their own system. The teachers could experience this sense during the workshop-carousel. As a result, the picture of the framework of the simulation game became much more clear.

Gladly, the feeling of confusion from that first morning of the training was soon shifted in to enthusiasm and action. The teachers started to take real ownership not only for the content of the game, but for new practices to help ‘learning by doing’ such as reflection and facilitation. And to finish a successful day on a high, we closed with a traditional Azeri dance together! Now we as trainers were unskilled and felt uncomfortable – and we as trainers came out of the experience with a big smile.

Wednesday we had a day full of workshops. Again on facilitation skills, reflection, exercising and of course political ideologies. Very productive that our local colleagues joined during those sessions!

Where were the tipping points? Well one key aspect was the introduction of the Action Plans. These supported teachers to made the switch from 'observer' to 'designer'. It really helped them to take ownership.

And as main exercise that afternoon, once again the Great Debate was the Ultimate! This time facilitated by 'showmaster' Andres Roberts. It was amazing. People went crazy, especially in the last round of debating.

Thursday we finished with a final assignment. We took that from the Armenian experience. We asked the teachers very concrete questions about the action plans. Tjip finished the event, by giving them tulips. Tulips grow everywhere, but you have to take care of them. Just like democracy.

In the upcoming months teachers will deliver the simulation game at their own schools. As a result of these games, sixty pupils will be elected to join the first meeting of the South Caucasus Youth Parliament in March 2011. Fifteen of them will visit the European Commission in Brussels in April 2011. So we will have touched 1500 young people across sixty schools in that time. We have helped create three wonderful learning experiences (sometimes when even the European Union thought it might not be possible!) And we ourselves have developed new learning, new connections and new ideas.

We planted another beautiful seed in Azerbaijan in December!

If you want to read more about the Democracy Project, click here.