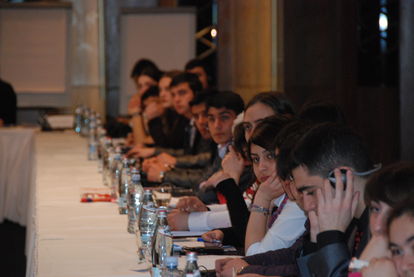 Today, the Second South Caucasus Youth Parliament was officially opened! Members of the opening committee were the ministers of education of Georgia and Armenia, EU representatives, directors of political schools in Tbilisi en Yerevan and off course the director of the Konrad Adenauer Foundation in Georgia. A quote of the Minister of Education Dimitri Shashkin tells it all: "The basement of the Georgian state is democracy. The basement is the democratic values that make us closer to the European states. You will never want to go back to the times when there was not a democracy!" Together with quite some media attention the 40 delegates of Armenia and Georgia were given warm words and welcome! The SCYP is officially opened!

All the delegates had the chance to present themselves and the topic they bring form their school to the South Caucasus Youth Parliament. Based on that the presidium identified four relevant topics that covered the initiatives of the delegates and formed the committee topics for the Second South Caucasus Youth Parliament. The committee topics are:

A)   Committee on education, culture and healthy life

B)   Committee on environmental protection and sustainability

The end of the day the committee groups worked on the first draft of their resolution and presented their work to the other groups. After diner, a talk show concluded the first day. During the talk show, delegates and journalists were interviewed, games were played and the Georgian and Armenian showed their dancing skills. Tomorrow, the delegates visit the Georgian parliament and after that work further on their resolution.