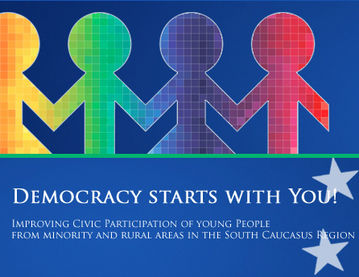 South Caucasus Youth Parliament 2012: Follow the experience from 26 to 29 March!

Democracy and political participation for the next generation

Governmental organizations in the South Caucasus, as well as the European Commission and Christian Democratic Parties in the Netherlands and Germany developed a program to introduce the concept of democracy and political participation for the next generation. This process was accompanied by designers from Kessels & Smit, The Learning Company. Jointly, we designed a simulation exercise for 5.000 school pupils from 60 secondary schools within the three countries.

This exercise has lead to the election of 20 pupils per country who will be representing their nations in the South Caucasus Youth Parliament (SCYP). Forty 11th grade students will take part in the meeting next week to discuss relevant issues, write resolutions and vote a committee of students who will visit Brussels in April 2012. The SCYP 2012 will be a parliament meeting in a full parliament setting. Georgian Minister of Education Dimitri Shashkin, Representatives of the Ministry of Education of Armenia and Deputy Head of the Delegation of the European Union to Georgia Boris Iarochevitch will participate in the opening of the South Caucasus Youth Parliament in Tblisi

Democracy Starts with You

„This project enables young generation of the South Caucasus to experience democracy and learn by doing rather than reading”, says Dr. Canan Atilgan, Project Director of “Democracy Starts with You!”. This is why the German Konrad-Adenauer-Stiftung, Dutch Eduardo Frei Stichting, the South Caucasus Schools of Political Studies and the Ministers of Education from Armenia and Georgia support the unique idea of bringing together Armenian and Georgian pupils in a South Caucasus Youth Parliament. The participating pupils are elected by their school-mates from minority and rural areas of Armenia and Georgia.

„Democracy Starts With You“ updates teachers in the South Caucasus region on modern teaching methods and contents on the subject of Civic Education as well as provides pupils with an experience of how democracy works in practice. Tjip and Pieterjan developed an advanced book for educational methods, that's been translated in three languages: Armenian, Azeri and Georgian.

The guiding principle of the project is “Democracy has to be experienced. It cannot be learned from books only.”

Follow the experiences of the parliament members and from Frauke, Tjip and Pieterjan in the next week via www.kessels-smit.com. We will regularly post blog-updates, movies and Facebook-posts!