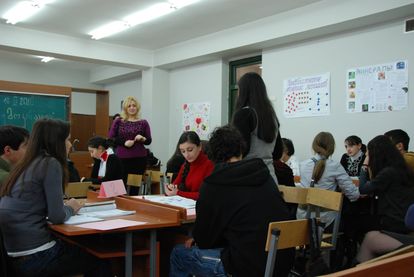 Something on Civic Engagement

Education plays a vital role in teaching a new generation about democracy, political participation and civic engagement. In most schools, democracy lessons have a very cognitive focus: memorizing facts, understanding political structures, etcetera. However, learning about what it means to be a politically active citizen and to take responsibility for your environment, requires a different type of 'lesson'. One that is about experiencing democracy and allows kids to apply skills and competencies in practice.

The German Konrad Adenauer Stiftung (KAD) in co-operation with the Eduardo Frei Foundation (EFF), supported by the European Union, took the initiative to develop a four day simulation game on this issue for 6,000 11th grade pupils in Armenia, Azerbaijan and Georgia.

As 'Kessels & Smit Something' we were invited to share our expertise on designing games. For us, it was very important to realize a process of co-creation with stakeholders in the three countries. We got the possibility to arrange a two day workshop with project-leaders, national experts and representers of KAS and EFF to jointly make a first draft of the simulation exercise.

We started the process with sharing our perspectives on democracy: what does democracy look like in your country? Whom do you see as an expert? We heard some astonishing stories about the political situation in the different countries. One of the stories was about two bloggers in Azerbaijan who were put in jail because of what they wrote. They declared: "We're proud of being in jail for our ideas, and not because of who we are."

During the 2 days, we created our own experience. We visited school N98 in Tbilisi (Georgia), to participate in a class on democracy. Pupils were working in groups, debating and convincing each other on themes that were relevant for them: the length of the break, children's rights or equal school rights for disabled children. In this class, ten cultures and nationalities came together and learned about the process of democracy. The teacher constantly switched between the Russian and Georgian language.

What did we learn from visiting this class? A lot! And we especially took the relevant themes of the discsussion and the role of the teacher, who gave space for the children to debate, as important aspects to capture in our simulation design.

The actual designing process started with formulating experiences: what kind of experiences do we want to create for our pupils during the simulation game? We formulated the experiences in smaller groups. People from different countries worked together. We ended the first day with five crucial 'democratic experiences':
1. Deepening the understanding of different ideologies;
2. Working towards a political debate;
3. Analyzing relevant stakeholders;
4. Interacting with people; and
5. Role playing.

In the beginning of  the second day we shared some theory on learning theories: behaviorism, cognitivism, humanism, social learning and constructivism. These theories gave input to translate the experiences to learning activities. We collected the learning activities and brought them together on a timeline of four days. That was a very special moment: the first outline of the simulation exercise arrived!

Creating a 'flow' of activities

It took some hours of intense dialogue to discuss the several learning activities with each other and to create the flow of the four day simulation exercise. But at the end, we came up with a very smooth outline of the simulation game. In the game, participants will slowly work towards a moment in which they vote for the student who is able to represent the class best in the regional youth parliament of the Southern Caucasus.

By the end of March we will return to Tbilisi to discuss the final version of the simulation outline. Meanwhile, the national coordinators will discuss the outline with teachers and pupils in their home countries. The process of involvement and interaction has started...

Something is going to happen in the Southern Caucasus.