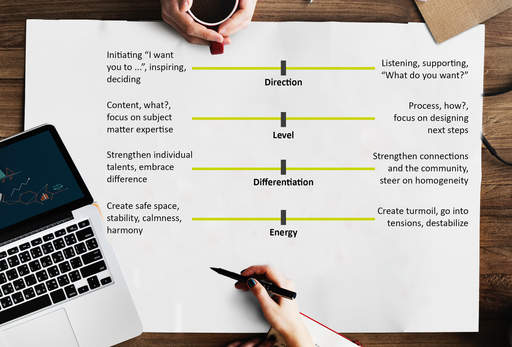 50 years and a whole number of insights further, we can now see leadership much more as an interaction between people, and its success depending on all sides. Our in-use image of the leader now includes women much more than it did 50 years ago.

Today, we see companies in a major transformation. In retail, for example, the old business models, built on smart marketing and formats and highly efficient supply chains are being augmented, and replaced, by digital business models. The first set of models rely on reasonable stable environments and predictability, the latter operate in a much more complex and volatile setting. The challenge is, that both models will co-exist for the foreseeable future – and that they require fundamentally different ways of leading.

In a conversation I had a couple of weeks ago with Nicholas Brassey, Ahold Delhaize’s CHRO Europe & Indonesia, we discussed how we could best grasp the leadership that was necessary in this transformed organizational reality, with the co-existence of business models. And that is how we came back to the starting point of situational leadership: the idea that what is the most promising course of action in a leadership situation might be different from one situation to the other.

The fact that this insight sounds like an open door is already interesting – because a whole tradition on leadership research is built on the contrary assumption. But anyway.

So, we thought, we would need to look into what we perceive of as ‘situation’, and if we can describe the different courses of action that might be needed.

‘Situation’, in situational leadership 2.0, is probably much more ‘situation’ as in ‘moment’, than as in ‘setting’. 50 years ago, what was called ‘situation’ was more like a reasonably stable setting, with variables that characterize the ability and willingness of the one being led. That setting could change with each person, but that change was probably more a question of days and weeks.

In our perception, with complex and rapidly changing environments, we will need to see ‘situation’ much more as ‘moment’. Whereas in one interaction sequence of half-a-minute or so, the most promising leadership behavior might be very initiating, just a minute later, the most promising strategy might be mainly supportive.

In our discussion, we differentiated four of these dimensions:

Whereas the frustrating aspect of this framework might be that it does not offer definite answers, we have found it to be helpful in that it asks productive questions.

I am writing about this model as work-in-progress, and as we start gathering more experience on how to work with it in our different practices. My main intention in writing now is because I am curious about related thinking and insights.