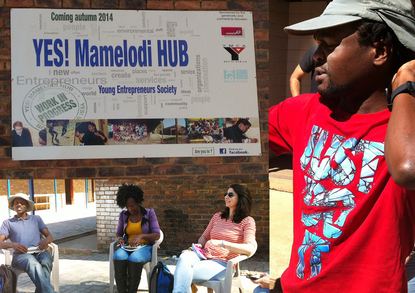 Create a solid foundation to uplift youth in Mamelodi


Monday the 28th of April we’re gathered on the premises of the YMCA in the township Mamelodi, Pretoria. Four young entrepeneurs, Vusi, Cyril, Elias and Dora, are developing a young entrepreneurial society hub together with Essent and Kessels & Smit. The hub itself will be launched in the South African spring and today we are committed to support the team in the last phase before opening. The mission of the hub is to enhance the culture of entrepreneurship in Mamelodi, by encouraging the professional development and financial independence for start-ups and existing entrepreneurs. The Mamelodi team will offer a learning and working environment at the hub with business expertise and a broad network to grow young people’s business.

Setting up a business and supporting other businesses

For the Mamelodi team, developing and creating the hub gives them the opportunity to grow as entrepreneurs themselves. They are constantly learning along the way. This makes the hub and the team a valuable example for the start-ups that will use the services and training opportunities at the Hub. During the last couple of months, the Mamelodi team renovated the site of the hub, thought about their mission and business plan and engaged with the local community about their plans.

Three weeks ago we interviewed Robert van Noort, our colleague at Kessels & Smit, about his role and contribution to this project. His enthusiasm for the project and especially for the young entrepreneurs is compelling: “I coach these young Africans in the same way as I coach CEO’s of large companies. It’s about decision making, seeing what’s at stake, broadening perspectives, and about vision: see what you have and what can be made. And about inclusiveness. I believe in these young people and I support and encourage them. I’m someone who believes in the future. I feel that people in this country have that too, there’s faith and hope.”

Robert brought Erwin van Laethem, CEO of Essent, a large energy company based in the Netherlands, to the YMCA in the township Mamelodi a couple of years ago. Seeing the needs and potential of this township, Erwin got enticed and wished to contribute to leadership in this township. He involved Young Essent and a group of young professionals stepped up: Parsia Tayebi, Gijs Brussen and Imke Maassen van den Brink. Since then they have visited the project several times to support the Mamelodi team.

Creating a breakthrough in existing patterns

Robert and Parsia invited us to visit Mamelodi to learn more about the project and contribute to the next steps by facilitating their conversation with the Mamelodi team. The Mamelodi team is doing things in a different manner than what people are used to, they explicitly want to start a social enterprise and ‘do good by doing business’. This does however cause mixed feelings in the community, or as Cyril puts it: “To start up a business in a community is hard work. It is difficult to start from scratch and not have fertile ground around you. In community work we are used to do social projects: having a thriving business is not what people expect. They have mixed feelings: they are proud of us and at the same time feel jealous or excluded.”

We are impressed with Cyril’s leadership and the way he wants to move forward: “For us two things are now important. First of all to bring together different interests: ours, those of the YMCA and of the community leaders in the township. So that they feel included and see the value of the work we are doing. The second important thing is to help young people to create a different mind set. They should no longer see themselves as job seekers (unemployment rates in Mamelodi are sky high) but as job creators: as entrepreneurs they can create work for themselves and for others.”

The result is in the process itself

In this particular session we focus on the first: how to move forward in an environment of mistrust. It is a true pleasure to see the special coaching relationship between Robert and the Mamelodi team at work. He supports the team with their thinking on how to break dysfunctional patterns and how to be clear towards others about their intentions and expectations. This is no easy task, but as Robert states: “Let’s hope it won’t all go smooth in the near future, in order for it to go smooth later on in the project.”

The Mamelodi team is truly eager to learn and each of the team members has gone through a profound personal transformation while working on the hub. Elias for example mentions the following: “Through the hub we have realised that there is no boundary in thinking. We have this wide space to come up with new ideas. The world is yours if you want to own it.” One could therefore say that the process the Mamelodi team is going through is as important as the result of establishing a successful hub, because the process in itself is uplifting the community.